Recap of the Wisconsin Regional

After returning from the Heartland Regional, the team was ecstatic because we earned the highest spot we’ve ever placed in FEAR history. We were all proud of how it went and about the robot we built. But the season was not yet finished. After some rethinking and redesigning, we headed to the Wisconsin Regional with a plan and with our heads held high. It was a tough competition, no doubt about it. The robot was frequently shifted from having ramps for teamwork to not having ramps for stability, in order to better fit with alliances. Multiple parts of our robots needed fixing and we fought against tough robots. But no mishap brought our team spirit down. At the end of the weekend, we were chosen by the seventh seed as an alliance partner to participate in the elimination tournament and made it all the way to the finals, where we were beaten by the first seeded team. 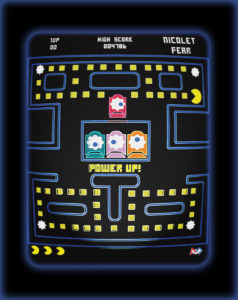 During the awards ceremony, we were awarded the Team Spirit Award sponsored by FCA Foundation for having unwavering morale throughout the competition, shouting multiple chants and cheering on other teams as well as our own. We were also called down so each of us could receive a medal for placing second overall in the finals. Finally, they announced who would be moving on to worlds. The first seed was going on, but two of their teams had already earned that, so it passed down. Both of our partners for the finals got those two positions, and everyone on Nicolet FEAR was all waiting to see what would happen. The announcer said that there was a mistake on the sheet regarding the wildcard position, and everyone started to pack up and leave. The competition was ended. We had come so close.

Then, one of the judges came out onto the field and fixed the mistake, and our team number was echoed throughout the stadium. At that moment, our section of the stands erupted in cheers and shouts. We hugged, we cried, we laughed, we shouted. We had done it. We had earned our spot and were heading to the FIRST World competition! We flew down to the stadium floor to take a picture with our alliance, still overjoyed with the fact that we were going to worlds. We rode back home that day with medals to show our achievements and a sense of pride that couldn’t be stripped away. 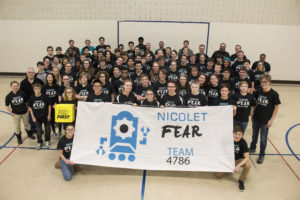 Author’s note: I am so proud of every single member of this team, from the dedicated students to the mentors who taught them. They not only worked day and night to lead FEAR to success, but they put their hearts and souls into their work. This success this year would not be possible without the help of every one of them. They make me proud to be on this team. They inspire me to be a better person. And I would not be who I am today without their care and support. I love you all.

Update: Currently, the team is making preparations for Worlds. However, we are in need of funding in order to register for the competition. The team would greatly appreciate any help that can be given. If you wish to donate, please go to the DONATE tab located in the menu on top of the website. Thank you.